A true successor to the RG350, the ANBERNIC RG351P features a number of changes on the level of both the hardware and software.
Powered by the Rockchip RK3326 and having 1GB of RAM, it handles pretty much everything the RG350 did flawlessly, while also capable of handling more platforms such as the N64, Dreamcast, and even PSP/DS. For anything newer than the PS1, performance does vary wildly from game to game.

Running on EmuELEC by default, an operating system that uses EmulationStation as a front-end (for organization), and RetroArch as a back-end (for managing/configuring emulators), ANBERNIC RG351P is built-in with stock firmware that performs not the greatest in anything beyond the PS1, so we’d highly recommend looking into custom firmware.

Other noticeable changes in the ANBERNIC RG351P include a lack of HDMI output and a single-SD-card design for handling both the OS and games/emulators.

The RG351P is also interacts over the internet. You can natively scrape databases for metadata for your collection, download new themes for EmulationStation, and even play online via RetroArch’s netplay feature.

The very first run of RG351P’s featured a built-in Wi-Fi chip, however, was removed in subsequent batches due to a flaw in design, resulting in the speakers emitting a loud crackle whenever there was network activity. Nowadays, you’ll need to use a USB wi-fi dongle (+ an OTG adapter, as there are not really any USB-C Wi-Fi dongles out there currently) in order to access the online functions. 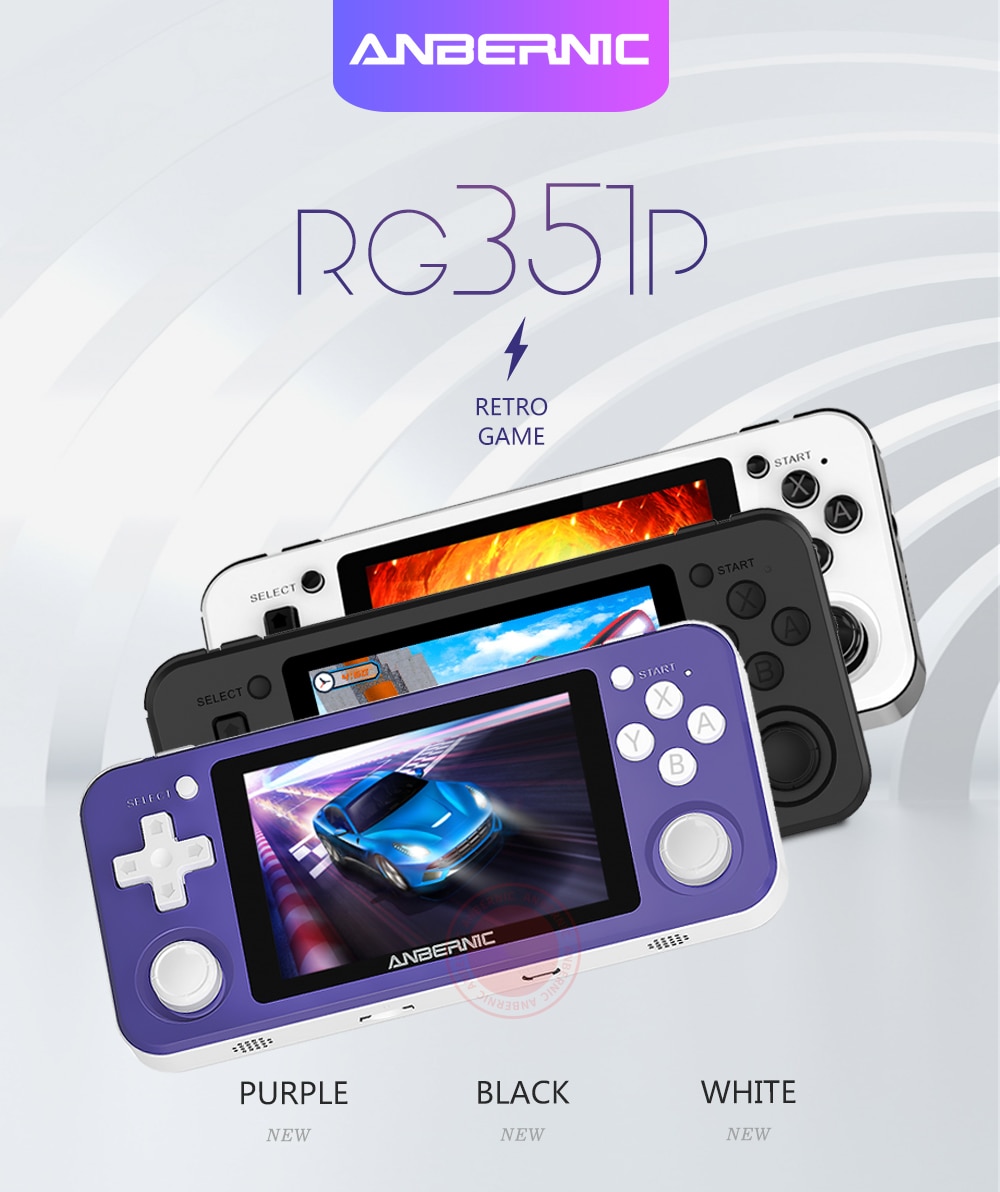 The RG351M is less of an upgrade to the RG351P than the RG350M was to the RG350. It features an aluminium metal shell, and a functional, non-flawed built-in Wi-Fi chip (2.4GHz only). Outside of that, there is nothing else of note about the unit; it is otherwise identical to the RG351P. 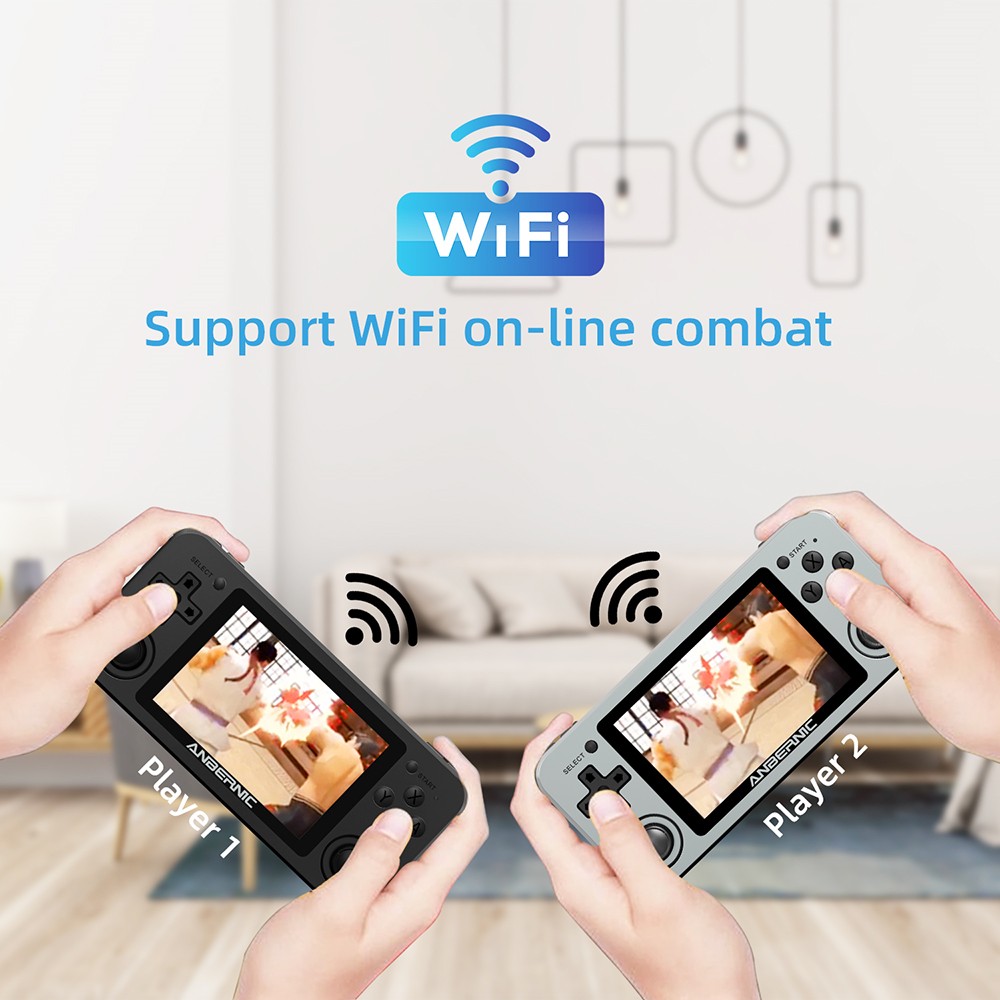 The RG351V is the third entry in ANBERNIC’s RG351 family, sporting a substantial number of changes over the RG351M, such as:
The design has changed entirely and is now vertically oriented. This means that the controls are situated below the screen, rather than on the sides.
The RG351V‘s screen is 640x480p and has a 4:3 aspect ratio. This allows it to better handle a larger variety of retro consoles.
For comparison, the RG351P’s screen is 480x320p and has an aspect ratio of 3:2. This allows pixel-perfect emulation of GameBoy Advance titles, but not for other platforms.
It now only features a single analogue stick.
The battery is slightly larger to offset the larger screen.
The device has returned to the dual-microSD card system as seen in the RG350 family of handhelds.
The ANBERNIC RG351V comes in three colours. A standard semi-transparent black colour, a matte grey colour, and unusual wood-grain pattern colour. 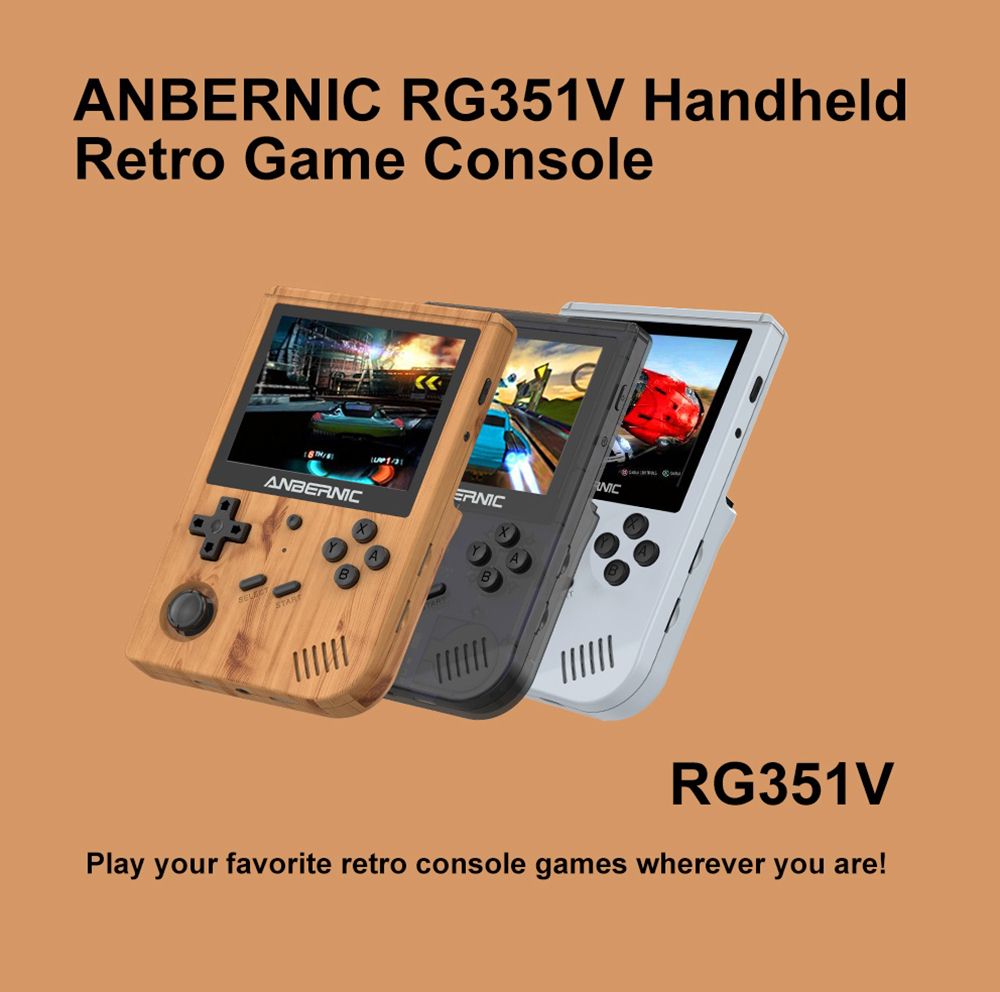 The RG351MP is presumably the final iteration of the RG351 handheld before the new “fourth generation” begins.
It brings all the most popular features of previous RG351 incarnations to a head in one, cohesive unit. Featuring the 4:3 display and dual-SD card design of the RG351V, with the premium, sturdy metal shell of the RG351M.

Surprisingly, the RG351MP does not feature a built-in Wi-Fi chip and must resort to using a Wi-Fi dongle like the original RG351P. 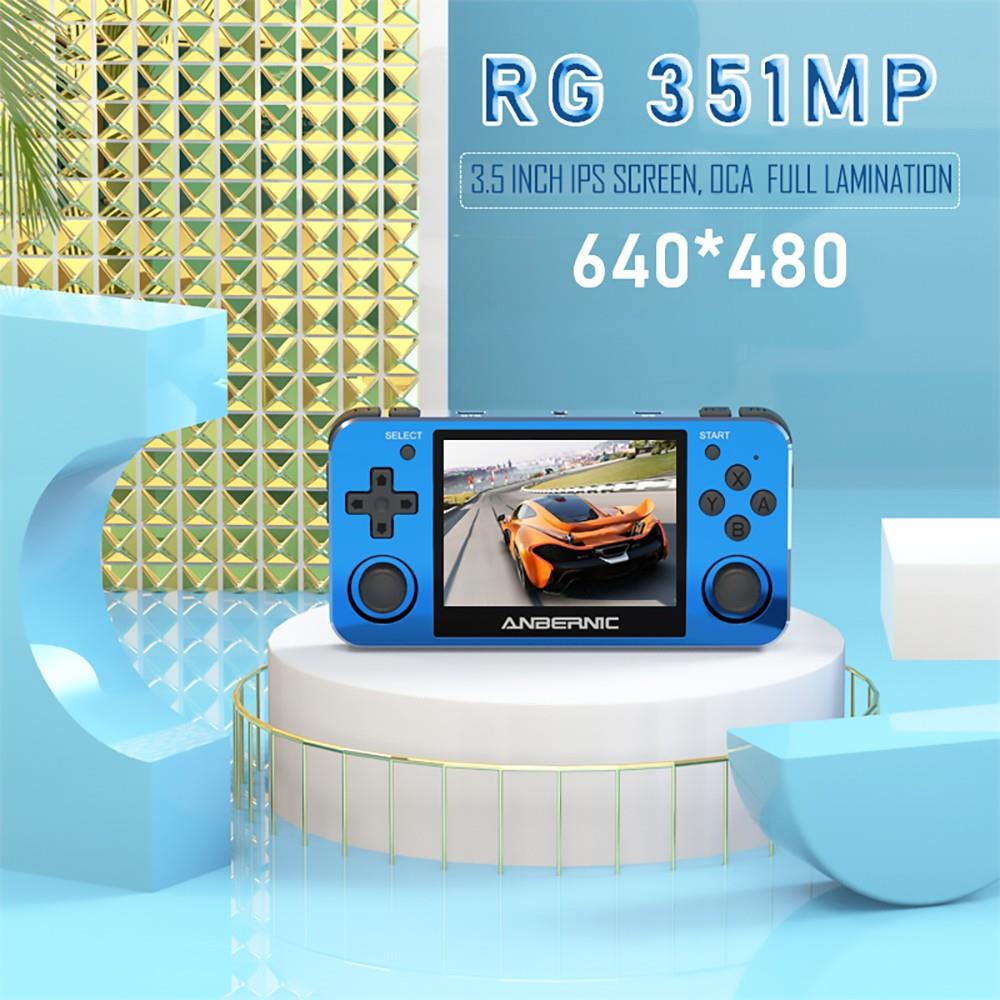 The headliner of the fourth generation. The RG552 represents a much anticipated technological leap from its RG351 predecessors. There’s a lot to say about this one, so bear with us for a second.

As you would expect from a technological leap, it features a more powerful processor – the Rockchip RK3399 – coupled with a sharp increase in RAM capacity (4GB total). This grants much more stable performance for platforms that were once considered “hit or miss” to emulate such as N64 and PSP. And grants the ability to emulate previously unviable platforms such as Dreamcast and Sega Saturn.

The centrepiece of the device for many is also its large display. Weighing in at the unusual resolution of 1920×1152 (5:3), and sizing up at about 5.36 inches. It is much larger than any of its predecessors. The screen is also now touch-sensitive.

Other noteworthy features include the ability to switch between Android (on the built-in eMMC storage) and Linux-based (external microSD card) operating systems with ease. The return of the mini-HDMI port. Wi-Fi functionality without any crackling noise. And the introduction of active fan-based cooling.

While it launched to a somewhat mixed perception due to some mixed receptions over the price-vs-performance ratio. The RG552 makes an excellent entry point into the field of retro gaming handhelds, and will likely only get better over time as updates and custom firmware are developed to really push the device to its limits. 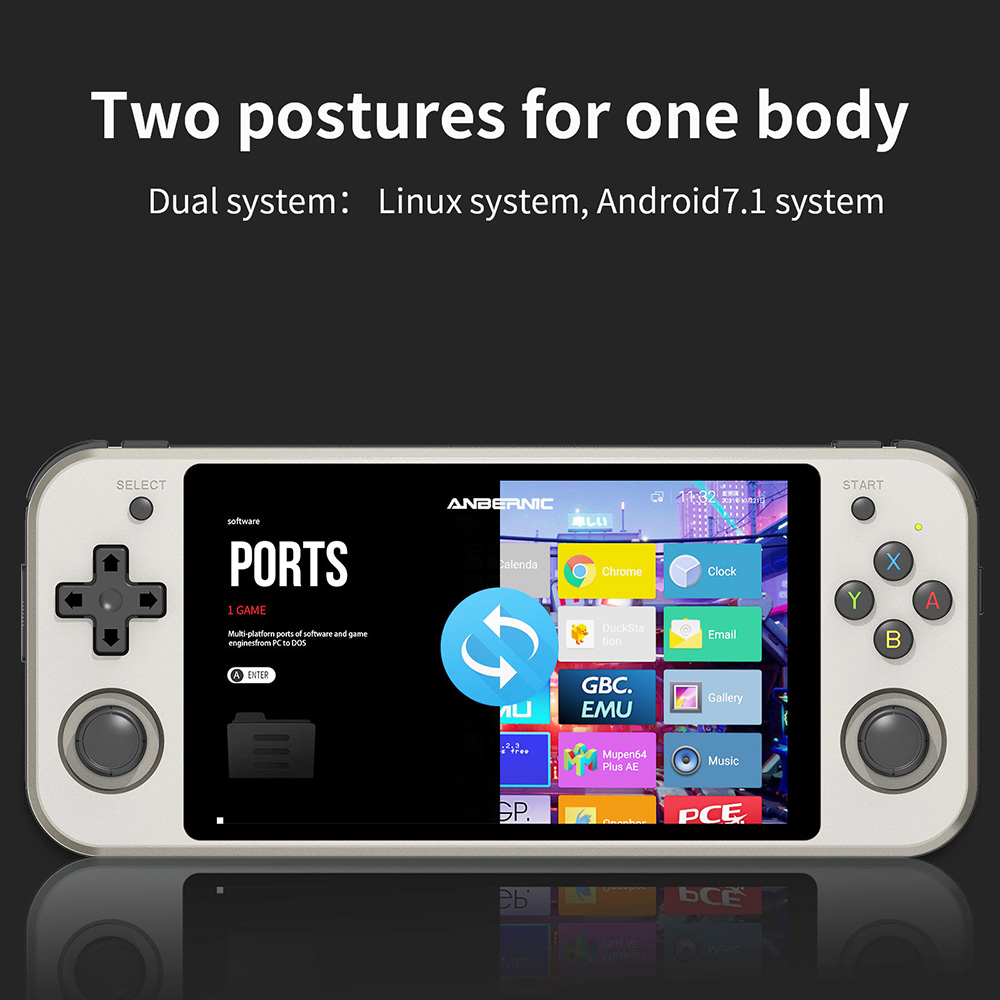 The RG503 features a Rockchip RK3566 SoC. This is in comparison to the RG552’s RK3399 SoC.
While no direct, real-world performance comparisons exist at this point in time, it is possible to get a sense of the raw difference between the two by checking benchmarks online.
From this, we can expect the RG503 to be roughly around 60-to-70% as fast as the RG552. While this won’t make too much of a difference in retro titles, you may notice it in more difficult-to-run 3D titles.
The RG503 also includes 5GHz Wi-Fi functionality. Making it more compatible with game streaming (i.e., Moonlight) than the RG552 than to the improved bandwidth.
The screen of the RG503 is also slightly smaller (4.96 inches instead of 5.36 inches).
Overall, we can conclude the following:
The RG503 is weaker and has a smaller display, but will have better Wi-Fi performance. The battery life may also be better thanks to the lower-spec SoC.
The RG552 is less expensive than the RG552, but is more powerful and has a larger display.
Meaning the RG503 sits in an odd midpoint between the third generation (RG351) and 4th generation (RG552) of ANBERNIC handhelds. 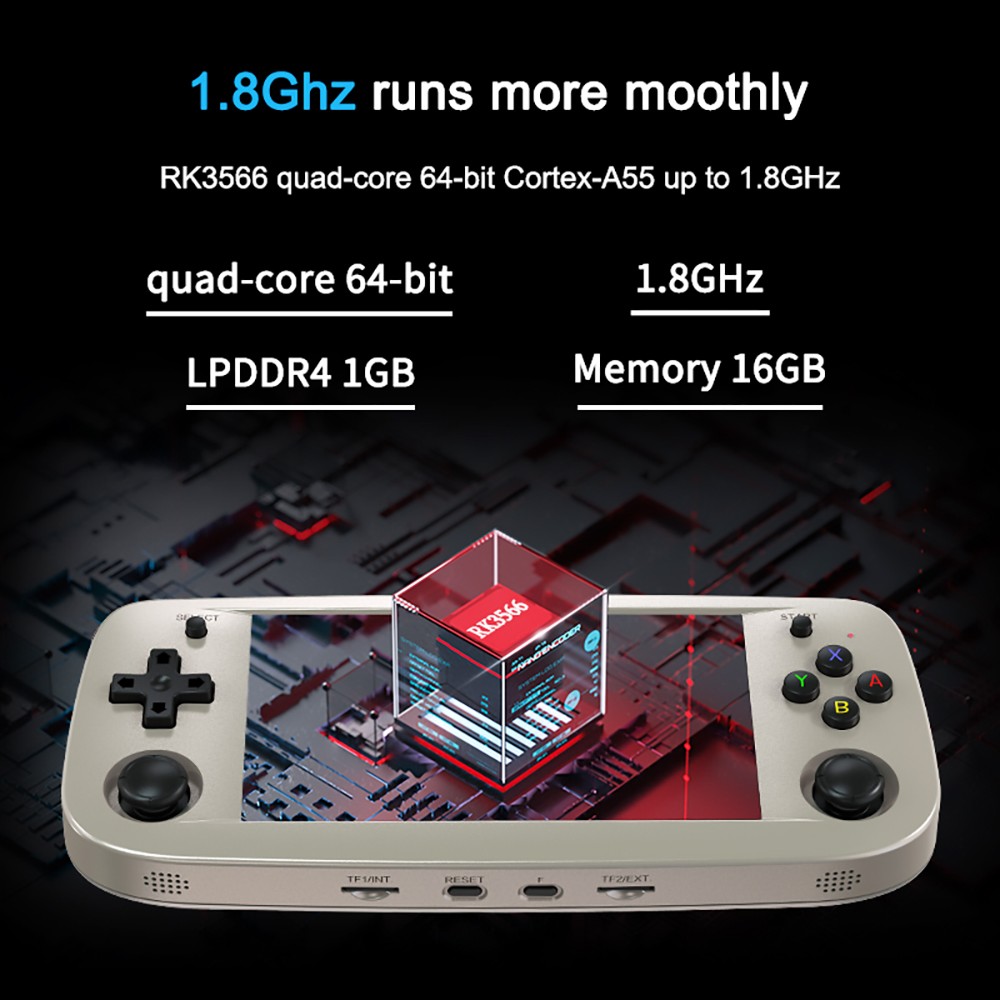 The ANBERNIC RG280V is a variant of the RG350 that features an entirely different layout, being horizontal and more comparable to handhelds like the original Bittboy models, or the LDK handhelds.

It features the same screen as the RG280M (2.8 inches, 480p) and most of the buttons. However, it does not feature any analogue sticks whatsoever.

The build of the unit itself is plastic, but it does feature a metal faceplate. Being the first RG handheld to incorporate a mixture of the two materials in the design.
It is considerably more portable than its predecessors, being only about half the length and noticeably lighter. 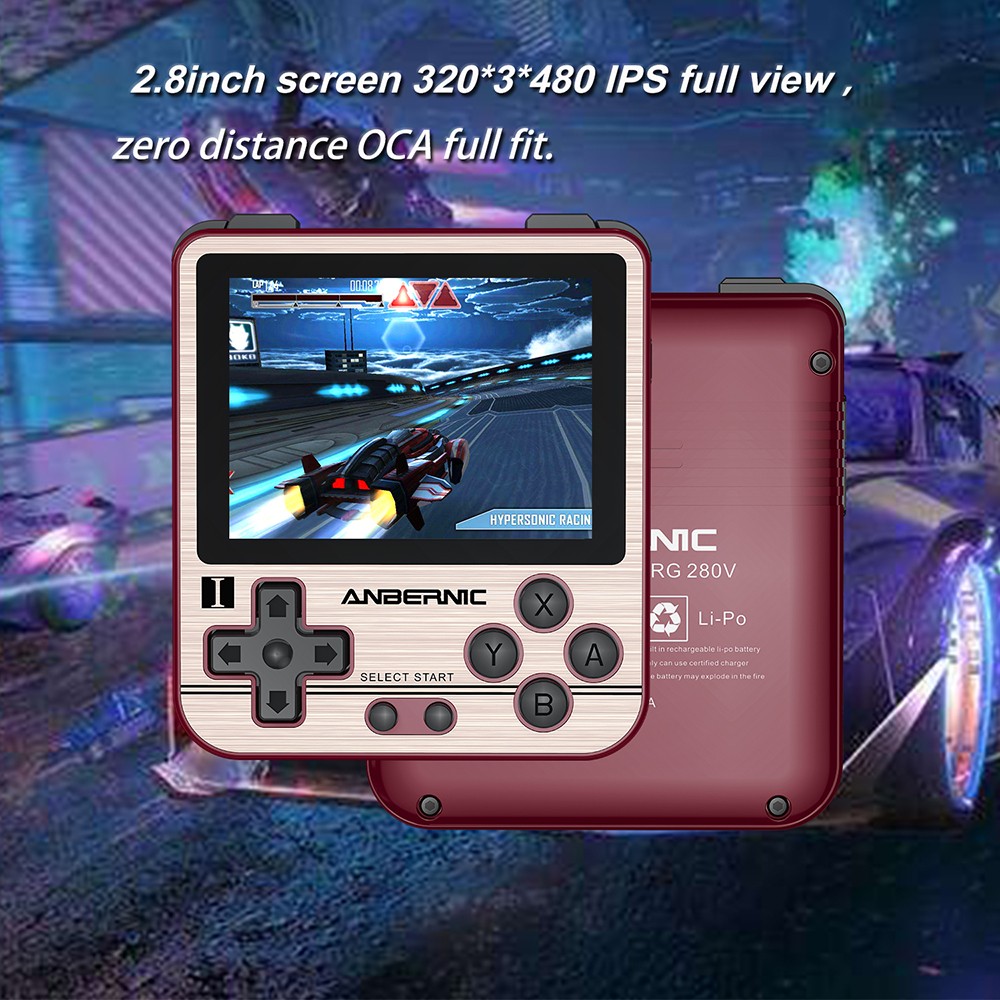 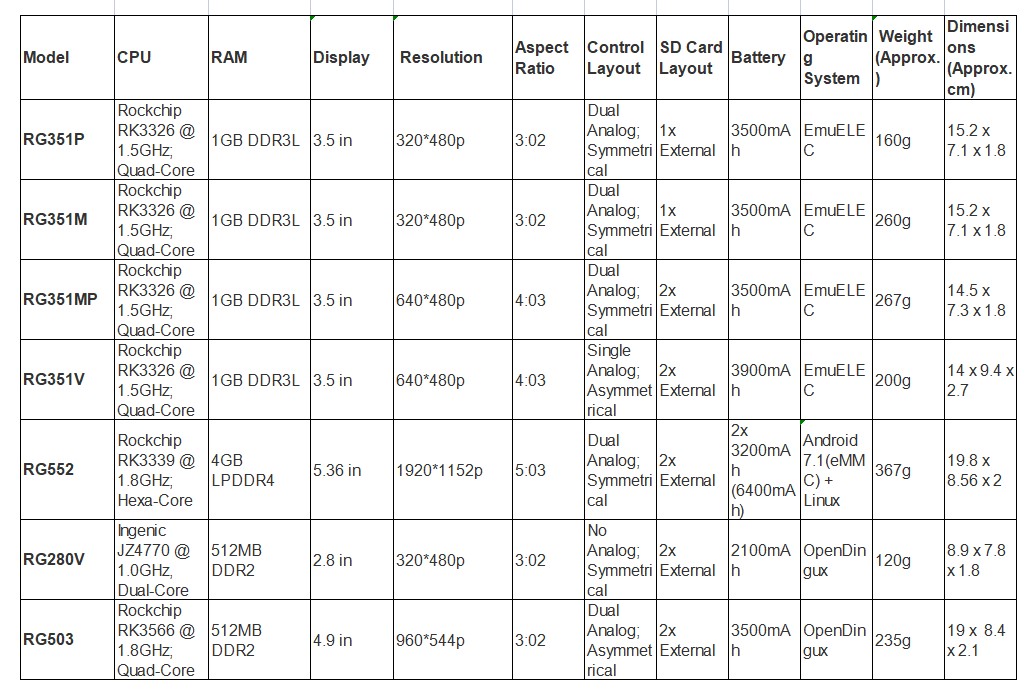